The Joseon royal tombs include the tombs of royal family members throughout the Joseon Dynasty (1392-1910). These tombs were listed as UNESCO World Heritage items in 2009. Joseon royal tombs are divided into two main categories: the neung (능, 陵) and the won (원, 園). The neung are the tombs of the kings and queens and those of the parents of the kings who later were granted the title of “king” after the enthronement of their sons. The tombs of other royal family members are called won. There are a total of 40 neung tombs and 14 won tombs for the royal Yi dynasty that ruled over Joseon. Most of the royal tombs, all except three, are situated within 40 kilometers of Seoul.
These tombs represent both the Joseon people’s belief in the afterlife and Confucian values, such as filial piety, patriotism and manners. They also show off the art, science, beliefs and mindset of society at that time, which have all changed as we have moved into the present. 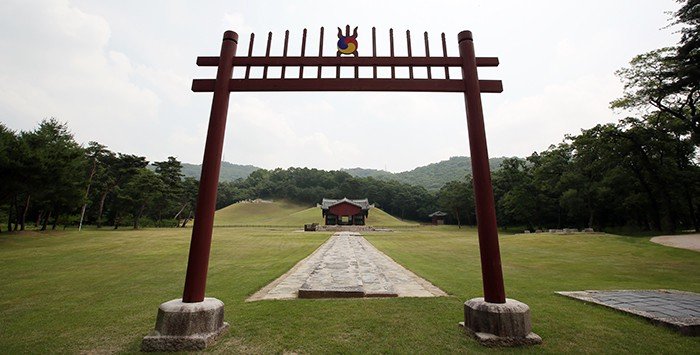 Myeongneung includes the tombs of two of King Sukjong’s wives: Queen Inhyeon and Queen Inwon. These tombs are exemplary examples of a typical royal gravesite. There is the hyangeoro, the path between the red wooden gate which means incense pathway & king’s road, or hongsalmun, and the jeongjagak, the T-shaped building found at all Joseon royal tombs. The raised central part of the path was dubbed the sindo. Only the spirits of the ancestors would walk there. The kings walked on the right-hand side, along the eodo path. Servants walked on both edges of the path. 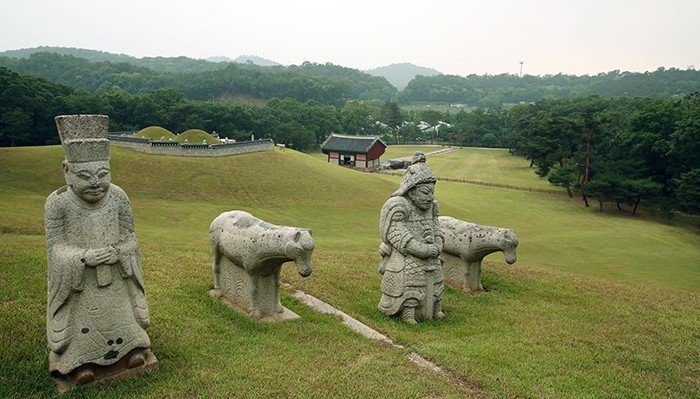 The name for the Seooreung Tombs literally means, “The Five Tomb Sites of the Joseon Royal Family.” They are all located in western Seoul.

The Joseon royal tombs were built according to strict rules concerning place and politeness. However, they also show slight changes that were made, while still reflecting the times, backgrounds and geographical conditions of each site. Covering 300 years from the Gyeongneung, which was made in 1457, to the Hongneung, which was built in 1757, the Seooreung Tombs reflect the wide arc of historical change. Her Bog Su, director of the Western Section of the Joseon Royal Tombs Management Office, explains the characteristics of the Seooreung Tombs on June 17.

The person in charge of the management of the Seooreung Tombs is Her Bog Su, director of the Western Section of the Joseon Royal Tombs Management Office.

He says, “You can see the changes and characteristics of Joseon royal tombs at a glance at the Seooreung Tombs. Thanks to the well-built trail, approximately 350,000 people visit the site every year. The Seooreung Tombs are the only place where you can see all kinds of royal tombs — neung, won and myo — altogether.” The Hogneung was originally a site for two tombs, for King Yeongjo and Queen Jeongseong. However, King Yeongjo was buried with Queen Jeongsun (1745-1805) in the Donggureung, which left the right side of the Hongneung empty. The Sunchangwon is the site for Crown Prince Sunhoe, the eldest son of the 13th Joseon monarch, King Myeongjong (1551-1563), and his spouse, Crown Princess Gong. Since these tombs are for a crown prince and his wife, they are called won and are decorated with relatively smaller and simpler sculptures.

The above photo shows the Daebinmyo, the tomb of Queen Jang Hui-Bin, whose life was a convoluted tale of ups and downs.

The Daebinmyo burial site came back to the Seooreung Tombs in 1969 after being moved to Opo Township in Gwangju, Gyeonggi-do (Gyeonggi Province) in 1719, the 45th year of the reign of King Sukjong. This is where Queen Jang Hui-Bin (1659-1701) is buried. She is the heroine of most period piece soap operas. She became a court lady and captured King Sukjong’s heart. She won various court titles as the king’s concubine: sukwon (숙원, 淑媛), soui (소의, 昭儀) and huibin (희빈, 禧嬪). She finally secured the position of queen, but lost the title and was later downgraded to the even lower rank of huibin. She was then sentenced to death by poison. Her tomb was turned away and was moved twice, reflecting her own real life of ups and downs. It was later upgraded to become the Daebinmyo by her son, the 20th Joseon monarch, King Gyeongjong (1688-1724), who awarded her the honorary title of Oksanbudaebin, or, “Lady Oksan, Great Concubine of the Palace” (옥산부대빈, 玉山府大嬪). 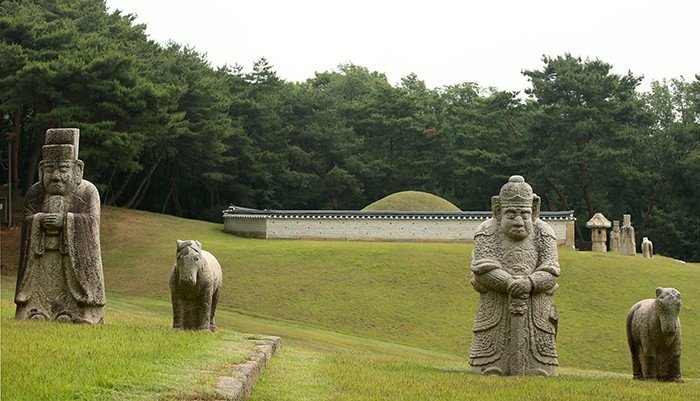 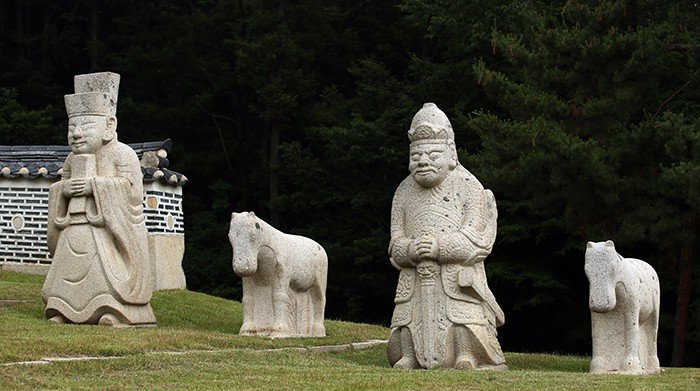 At the Seooreung Tombs, people can see the changes in Joseon royal tomb design throughout the ages through the stone sculptures of warriors and civil servants, which are designed to guard the tombs. The stone warriors, in particular, were only allowed to be erected at the tombs of the kings, as they symbolize his authority. As time moved on, later stone warriors are engraved with more details and were crafted with a more sophisticated touch. From the top, photos show the stone warriors and civil servants at the Gyeongneung (1457), the Changneung (1470), the Ingneung (1680) and the tomb of Queen Inwon, the Myeongneung (1757).

Apart from the differences among the three kinds of Joseon royal tombs, changing styles and stone-carving techniques over 300 years can be easily seen in the stone warriors and civil servants guarding the tombs. These sculptures were created by top-class masons of their time. The sculptures show the development and patterns of art and techniques of stone sculpting. Unlike the stone civil servants, which do not show much change over the centuries, the stone warriors show many visible changes in their armor, in the shape of their swords and even in their facial expressions. Some of them are close to real size, according to an order from King Sukjong. Sukjong also ordered a reduction in the number of items put inside the tombs. For this reason, forms of stone sculptures with more realistic facial expressions can be seen at the Myeongneung.

The Seooreung Tombs cover a not-too-short time period of Joseon history. Located in Deokyang-gu District in Goyang-si City, Gyeonggi-do, this oasis of greenery is a popular picnic spot for nearby elementary, middle and high schools, as well as for weekend outings. It is also good for a stroll, thanks to the 1.92-kilometer pathway lined with hornbeam trees, the Seoeonamugil (서어나무길) in Korean, and the 1.08-kilometer pathway lined with pine trees. Various restaurants surrounding the tombs are known for their delicious food, becoming a must-go venue for a weekend retreat. Visitors in twos and threes take a walk around the Seooreung Tombs on a weekday. They walk along a path lined with wild flowers. 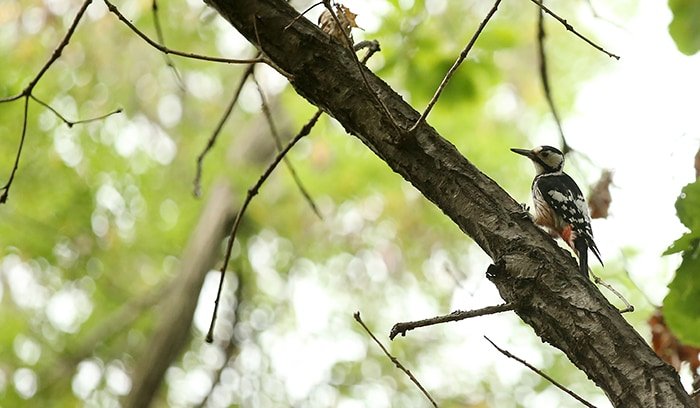 A grey-spotted woodpecker is busy searching for prey along the pine tree-lined walking path on June 17. A walking trail lined with pine trees is part of the Seooreung Tombs. It offers a fragrant aroma to tomb site visitors.