A Taegeukgi owned by a soldier from the Korean Liberation Army, Moon Eung-myeong, is on display at a photo exhibition currently underway at Gwanghwamun Square in downtown Seoul. Moon’s fellow independence activists wrote their messages onto the worn flag as Moon was about to leave the movement. The exhibition, titled ‘Precious Memories, Eternal Pledge,’ focuses on the history of the national flag and continues until Aug. 19.

Waves of Taegeukgis celebrated Liberation Day on Aug. 15 this year as the nation marked the 70th anniversary of its independence. In the heart of downtown Seoul, Gwanghwamun Square was home to a special exhibition spotlighting photographs of the Taegeukgi flag, which has shared in the modern nation’s history over the past 70 years.

Under the title of, “Precious Memories, Eternal Pledge,” the photo exhibition, still underway at the square, brings to light the history of the national flag, a symbol that has accompanied the nation along its journey, from the struggles for independence through to this day.

The exhibition tells the story of the flag in five parts: liberation, protection of the nation, peace, a pledge to the nation and, lastly, special exhibits involving citizens. Approximately 270 images related to the national flag and how it has transformed over the years will be on exhibit until Aug. 19. Visitors have pictures of themselves taken on Aug. 15 in front of at a photo exhibition that is underway at Gwanghwamun Square to mark the 70th anniversary of Korean independence.

The “Liberation” section takes a look back on times spanning from late Joseon, when the Taegeukgi was first designated as the national flag, until the country was granted its independence. Other exhibits feature Taegeukgi flags in company with those who fought during the Korean War (1950-1953). The willingness of many independence activists to sacrifice their lives can be seen in the photographs.

In the “Peace” section, images showcase the nation’s transition from being a nation which asked the world for help during war into one that dispatches its soldiers overseas as part of the efforts made toward world peace. Regular citizens, too, are part of the event, as they submitted their own thoughts on what the “pledge to the nation” really means as art. Kim Ye-sun, who joined the marines during her second year of middle school as the Korean War broke out, holds up a framed Taegeukgi. On the national flag are written wishes from her friends including, ‘I hope you will have the last laugh.’

“This exhibition is a chance to look back on our soldiers who had to endure over the past 70 years of ordeal as they tried to bring independence to the nation,” said Minister of National Defense Han Minkoo. “I hope people here can remember and share in the allegiance to the nation that our soldiers have vowed to uphold.”

The exhibition is open from 9 a.m. to 10 p.m. every day at Gwanghwamun Square. Among 270 or so photographs on display at the ‘Precious Memories, Eternal Pledge’ exhibition currently underway at Gwanghwamun Square to mark the 70th anniversary of Korean independence, is an image of the proclamation of the Korean government in 1948. The photograph, on exhibit at the ‘Precious Memories, Eternal Pledge’ exhibition currently underway at Gwanghwamun Square, depicts soldiers advancing in a 1950 street fight in Yeongcheon County, Gyeonggi-do Province, holding a rifle with a Taegeukgi flag tied to it. 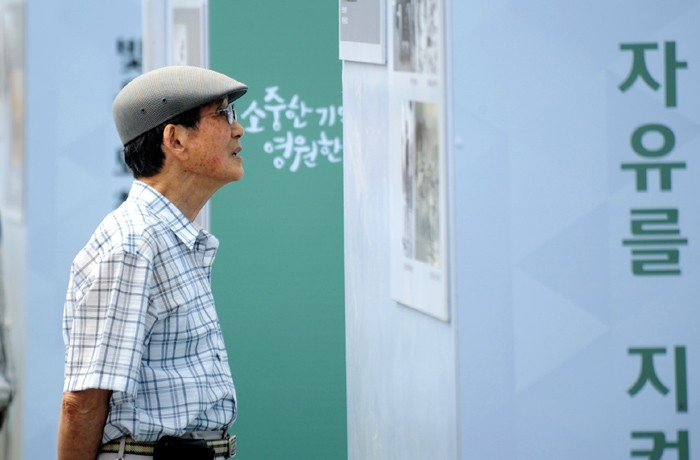