Home Magazine History Journey back to the Neolithic Age Stone arrowheads are one of the major hunting tools from the Neolithic Age.

Neolithic people built wooden boats to get access to marine resources. Pictured is the oldest wooden ship in Korea that dates back to the Neolithic Age. It was carved from pine, is 310 centimeters long and 62 centimeters wide.

During this later period, people survived by farming and by hunting with these tools. The art of pottery began during these times, too. Earthenware pottery was manufactured and used to store food and to cook, as well.

The National Museum of Korea in Yongsan-gu District, Seoul, will play host to a special exhibition starting on Oct. 20 that will spotlight the life and times of Neolithic people.

“Neolithic People: A New Life and a New Climate” sheds fresh light on a dynamic change we underwent during that era in terms of both fauna and flora, a change that was caused by a rise in global temperatures. The exhibition also shows how people survived in such changing environments, making use of the enriched natural resources at hand.

The exhibition consists of three sections. The first introduces how the ecosystem transformed with dramatic climate change. As the temperature rose, broad-leaved forests started to cover mountains and hills. Such broadleaf trees also brought to the people edible nuts, such as acorns and chestnuts. Giant mammals, such as mammoths, which could survive freezing weather, gradually disappeared. Instead, a growing number of smaller-sized game, including deer, boars and elks, roamed the land. A vertebrae from a Neolithic-era whale is part of the ‘Neolithic People: A New Life and a New Climate’ exhibition. It has a broken harpoon pierced through it. The bone shows us how Neolithic people hunted such large marine animals, such as whales and seals. A crude mortar and pestle shows how Neolithic people were able to peel and grind nuts and grain on a stone plate using a stone rolling pin.

In the second section, viewers will encounter a variety of tools developed during the period, proof that people were trying to adjust to the changing environment. Some of their creations include fishing hooks, harpoons and weights for fishing nets made of stone or animal bones. This gives us a glimpse into what their life might have looked like. In particular, some parts of the first-ever wooden boat from the era are unveiled to the public for the first time. The ages-old ship was first excavated in Changnyeong-gun County, Gyeongsangnam-do Province (South Gyeongsang Province), in 2005.

This section also features a series of relics used for what is called “The Neolithic Revolution”: farming. On exhibit are earthenware pottery pieces that were used to store and cook food, and a stone mortar and pestle set designed to peel and grind nuts and grains, such as millet.

The final section spotlights burying customs of those times. Exhibits here give information about how the deceased were placed in tombs and which items were buried together with them. Earthen pottery from other parts of the world during that period, including from China, Japan and the Middle East, are also on display here, giving us an intriguing opportunity to compare in terms of shape and pattern Korean artifacts with artifacts found all around the world.

The exhibition continues until Jan. 31 next year on the first floor at the National Museum of Korea and it’s free-of-charge. 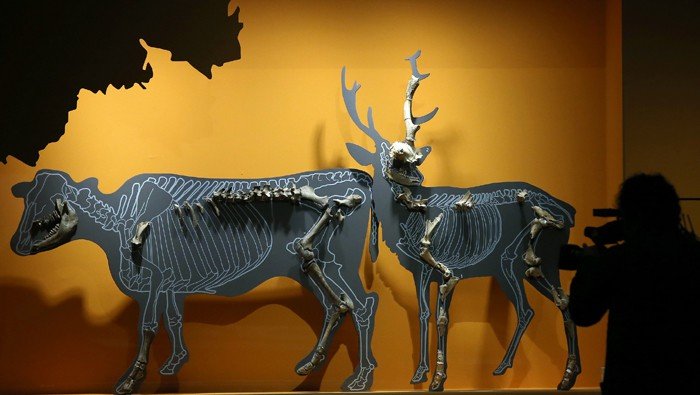 Calf bone pieces (left) and deer bone pieces from the Neolithic Age are placed in larger diagrams to show where they belonged on the animals. During Neolithic times, large animals went instinct and smaller animals, such as deer and wild pigs, increased in numbers. The art of craftwork is believed to have begun on the Korean Peninsula during Neolithic times. Ancient people made works of art in human or animal shape, using soil, stones and animal bones. People browse the artifacts that date back to the Neolithic Age at the ‘Neolithic People: A New Life and A New Climate’ exhibition that kicks off on Oct. 20. Among the exhibits are earthenware pottery with geometric, animal and flower patterns, stone hatchets and fishing tools. ‘Neolithic People: A New Life and a New Climate’ continues until Jan. 31, 2016, at the National Museum of Korea in Seoul.