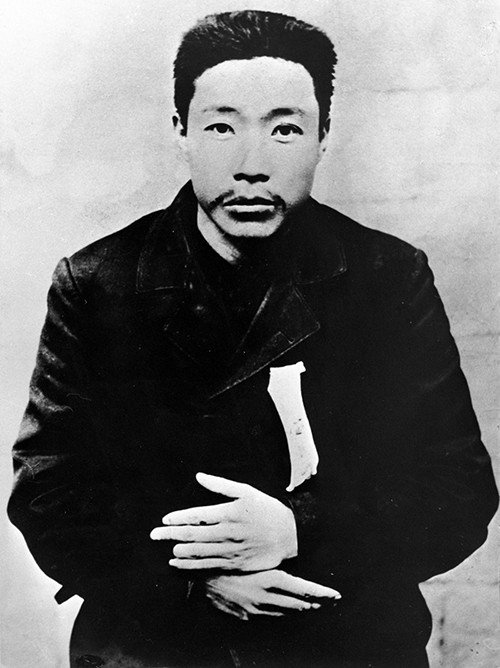 Born in Sincheon, Hwanghae-do Province, in 1879, An devoted his life to the independence movement in 1905 as an act of resistance to Imperial Japan when it forced Joseon, or old Korea, to sign the Eulsa Restriction Treaty (을사늑약, 乙巳勒約) in an attempt to deprive Korea of any international diplomatic rights.

As Joseon fell under the yolk of colonization, it suffered the dethronement of Emperor Gwangmu (광무제, 光武皇帝) (1852-1919), formerly King Gojong, and its military was disbanded. In the light of this, An Jung-geun went overseas to help raise independence forces. In 1908, An Jung-geun was a leader of the independence fighters and led his forces in Hamgyeongbukdo Province, in Gyeongheung and Hoeryeong, in battles against Imperial Japanese forces. After that, he traveled to Vladivostok and Kraskino, also known as Ianchikhe (煙秋), in order to continue his struggle for his nation with his comrades.

In September 1909, An Jung-geun was in Vladivostok and heard about Hirobumi Ito’s planned visit to Harbin, in Heilongjiang Province, northern China, which was then part of Imperial Japanese Manchuria. He planned his act of patriotism with his comrades, including Wu Deok-sun (우덕순, 禹德淳) (1876-1950).

At 9 a.m. on Oct. 26, An Jung-geun shot three bullets into Hirobumi Ito as he was being greeted by Russian soldiers at the train station in Harbin and as he was walking toward the gathered diplomatic envoys. When the Imperial Japanese military police came to arrest him, he yelled out, “Long live the Republic of Korea,” in Russian.

In November 1909, An Jung-geun was sent to jail by the Russian military police in Lushun, or Port Arthur. During his interrogation and trial, he criticized the illegal invasion of Korea by Japan, and urged Imperial Japan to address its acts. An Jung-geun also contended that his home nation should be granted complete independence and that peace should take root across Asia.

To commemorate his contributions to the fight for Korean independence, the Seoul government posthumously awarded him the Order of Merit for National Foundation, Republic of Korea, in 1962.