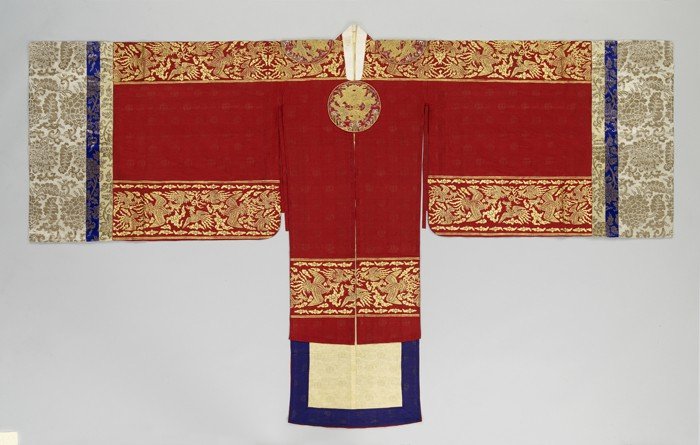 The formal red wonsam dress, the hongwonsam, was worn by the crown princess during various Joseon court ceremonies. The photo shows the dress worn by the wife of King Yeongchin (1926-1970) in the early 20th century during the Daehan Empire (1897-1910).

Women in the royal court throughout Joseon times (1392-1910), such as queens, royal concubines and court ladies, were given ranks called naemyeongbu (내명부, 內命婦).

The queen led all the women and they lived according to a strict order of ranks and rules. The rules of the royal family governed their lives in all aspects, such as where they lived, what they ate and what they wore. There were eight different ranks for the king’s concubines and they were all placed under a queen, the lawful wife of the king. There were also four different ranks under a crown prince’s concubines. Their roles were different according to their ranks, as were the treatments to which they were entitled.

The National Palace Museum of Korea is holding the “Queens and Concubines of the Joseon Dynasty” exhibit in celebration of the 10th anniversary of the museum’s opening. The exhibition has 300 artifacts, such as costumes, accessories, stamps, paintings and writings, that portray the lives of court women during the Joseon Dynasty and the Daehan Empire. 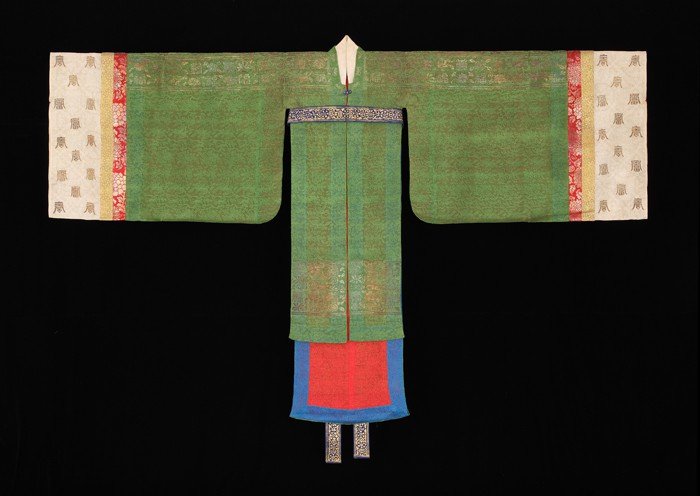 The green wonsam, or nokwonsam, was worn by the wife of King Uichin (1877-1955), a brother to King Yeongchin, during royal ceremonies.

A woman’s rank was most visible in the type of clothing she wore, the wonsam (원삼, 圓衫), an official dress for various royal ceremonies. The color, pattern and size of the dress were differentiated in line with their rank. An empress wore yellow, a queen wore red, a crown princess and concubines were dressed in purplish-red and a princess and the wife of a prince wore green. Such differences are clearly demonstrated at the exhibition. 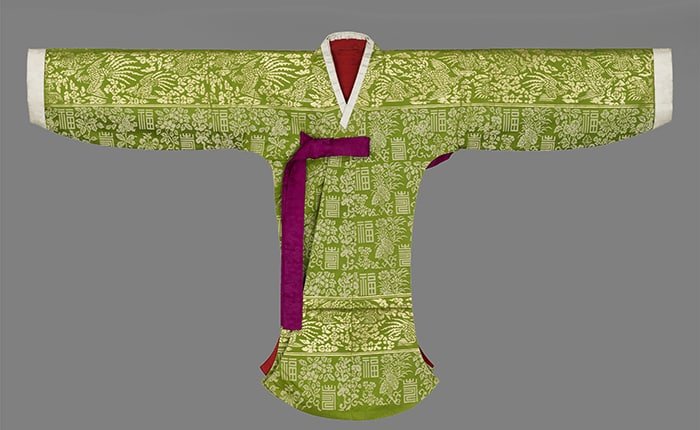 A dangui jacket, a blue skirt with a gilded frill (남색스란, 藍色膝欄) and a pair of shoes (당혜, 唐鞋) were all worn by the wife of King Yeongchin. They are adorned with gold leaf to show the status of the crown princess.

The status differences were not limited to dresses. A dangui was a type of casual jacket worn by women in the Joseon royal court. It was also used as a simple formal dress for those who lived outside the court. Such jackets were also differentiated according to rank. The dangui worn by a queen, a crown princess or a princess all had a gilded pattern, but lower court ladies and other aristocratic women were not allowed to have such patterns on their dresses.

In addition to the clothing, the exhibit shows how aristocratic women were selected to become a crown princess, a queen or a concubine. It also explains how these women were trained before a royal wedding and were taught the rules of the royal court.

The exhibition shows how a queen, a crown princess or a concubine were trained by reading, and the importance of giving birth to a son. It explains the roles and the rights of a queen, including picking mulberry leaves and personally raising silkworms. Funeral details for a queen or a concubine, and shrines dedicated to them, are also on display.

The exhibition continues until August 30. For more information, please visit www.gogung.go.kr or call 02-3701-7500. 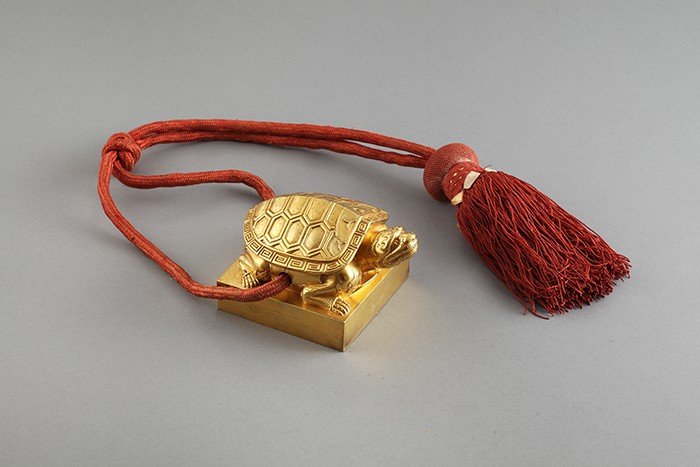 Stamps were designed differently according to the rank of the women who would use the Joseon royal seal. The golden stamp (top) was given to Queen Seonui (1705-1730), a concubine of King Gyeongjong (1688-1724), when she was proclaimed a concubine. The wooden stamp (bottom) was used by a concubine in the 18th century.

The ‘Munjinjinchandobyeong‘ painting shows a ceremony to mark the 60th anniversary of Queen Sinjeong’s birth. The queen was the mother of King Heonjong (1827-1849). The painting is on loan from the Los Angeles County Museum. It shows the size of a royal ceremony and related rules and rites. Raising silkworms was one of the most important rituals for a queen during Joseon times. This book, the Chinjameuigwae (1767) (친잠의궤, 親蠶儀軌), shows how to raise silkworms.