Home Magazine History Hangeul letters revive voices from the past

“Did you have a pleasant and peaceful rest throughout the night last night? I told you yesterday to come back to the palace by tomorrow…”
The polite phrasing and the crisp hand writing capture the eyes. This is part of a letter written in Hangeul by King Sukjong (r. 1674-1720) to his mother, Queen Myeongseong (1642-1683).

The letter shows how high-class people, including kings and queen consorts, used the Hangeul alphabet and writing system. This is in contrast to the prejudice found among many other noblemen of the Joseon Dynasty (1392-1910) who solely valued writing in traditional Chinese characters, and looked down on Hangeul as an alphabet for women or commoners by referring to it as “eonmun” (언문, 諺文).

The National Hangeul Museum has on display about 100 letters written in Hangeul in the special “Read Society Through its Hangeul Letters” exhibition, scheduled from April 21 to June 7. These letters reflect the life style, linguistic sense and artistic talent of their times. 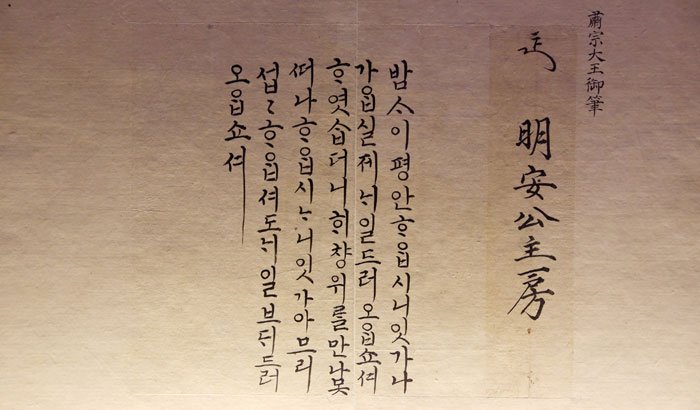 King Sukjong wrote to his mother, Queen Myeongseong, in 1680. In the letter, the king asks after her health and wellbeing. King Seonjo (1567-1608) wrote a letter to his sick daughter, Princess Jeongsuk. In the letter, he sets her at ease by saying that he will send medical staff and that he hopes that her disease will be cured naturally.

The exhibition is composed of three parts: Social Networking Services of the Digital World, The World Revealed by Letters and the Beauty of Letters. In the first section, the exhibition focuses on the diversification and changes of linguistic life and changes in communication tools used today thanks to the development of the Internet and smartphones. It looks at multi-directional communication and compares it to the two-way communication found in the past, various other forms of communication, such as the differences between text messages and handwriting, and looks at newly created words used in slang or on the Web.

In the second and third sections, the exhibition sheds new light on the social, cultural, historic and artistic meaning of Hangeul letters. Various Hangeul letters are introduced and tracked from Joseon times through to the present. From kings down to nobi, the lowest caste in Joseon society, all Joseon social strata exchanged letters in Hangeul. The livelihood of the people, historic events and linguistic arts are all embedded in these letters.

The displayed letters include one from a military officer, Na Sin-geol (1461-1524), to his wife, Lady Maeng of the Sinchang Maeng clan, written around 1490. He wrote it while on his way to Gyeongseong in Yeongan-do (Hamgyeong Province). It is believed to be the oldest Hangeul letter in existence.

Another letter is the one found in the tomb of Yi Eung-tae. In this letter, a wife expresses how much she misses her husband who has passed away

In the modern history section of the exhibit, visitors can read first-hand letters written by student soldiers and by North Korean soldiers during the Korean War (1950-1953). There are letters from independence fighters during colonial times, and letters written by workers who were dispatched overseas, mostly to Germany, to make money for the nation during the 1960s and 1970s. One letter in particular, written by a student soldier, contains the tragedy of war and the sad feelings of human existence.

Moving into modern times, there are letters written by non-Korean students from around the world who studied Hangeul at one of the globe’s King Sejong Institutes. Museum-goers can see first-hand the rising popularity and growing interest in learning Hangeul seen around the world.

The exhibition features letters written by Kim Jeong-hui (1786-1856), which he wrote easily and in a lively manner, and a letter by a court lady to the wife of Karl Ivanovich Veber, the Russian minister to Korea during the reign of King and later Emperor Gojong (r. 1863-1907). In the letter, the court lady, surnamed Ha, shows the essence of court style writing.

Joseon military officer Na Sin-geol wrote to his wife, Lady Maeng of the Sinchang Maeng clan, in around 1490. In the letter, he expresses how much he misses and cares for his family, despite the fact that he cannot visit his home. It was discovered in 2012 in a tomb of the Anjeong Na clan.

A museum-goer examines a letter written by a woman named ‘Woni’s mom’ during a press event for the exhibition on April 20. In the letter, written in 1586, a wife tells how much she cares for and misses her husband, who has passed away some time before. The letter was found in the tomb of Yi Eung-tae. 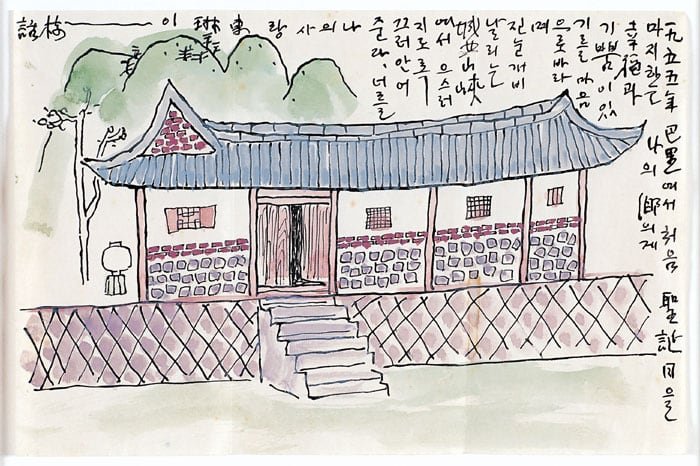 In 1964 when he was in New York and his wife was in Korea, Kim Whanki wrote a letter to his wife, Kim Hyangan, decorating it himself. Empress Myeongseong (1851-1895) wrote a letter to her relative Min Yeong-so. In the letter, the empress expresses her hope to, ‘pursue stability,’ despite the political turmoil of Joseon times.

Another unmissable part of the exhibition is the Hangeul letters and postcards with drawings by artists such as painter Kim Whanki (1913-1974), known for his Western-style paintings, and world-class video artist Nam June Paik (1932-2006).

During the exhibit’s opening ceremony on April 20, President Kim Dong-ho of the Presidential Committee for Cultural Enrichment said, “This is a very helpful and interesting exhibition. Letters are a medium of communication and play an important part in delivering people’s thoughts.”

“Hangeul was the basis of Korean literature, metrical literature and epistolary literature, and it contributed to the creation of various Hangeul fonts, such asgungche, the court style of writing the Korean script, and the many Hangeul designs that exist today. Its scientific structure has also lead to the spread of Hangeul worldwide,” he added.

More information about the National Hangeul Museum is available at its homepage with services in four languages: http://www.hangeul.go.kr 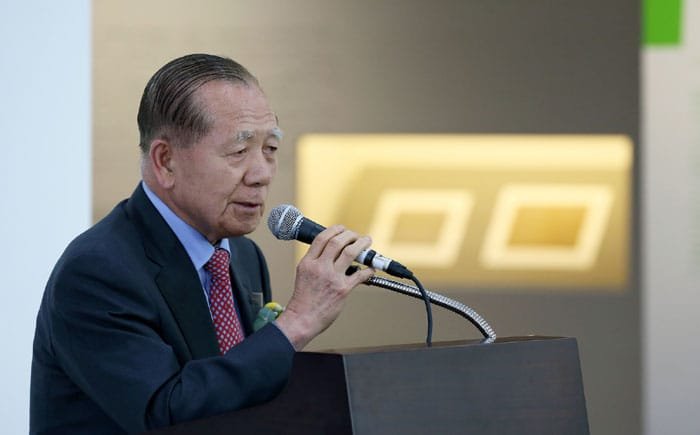 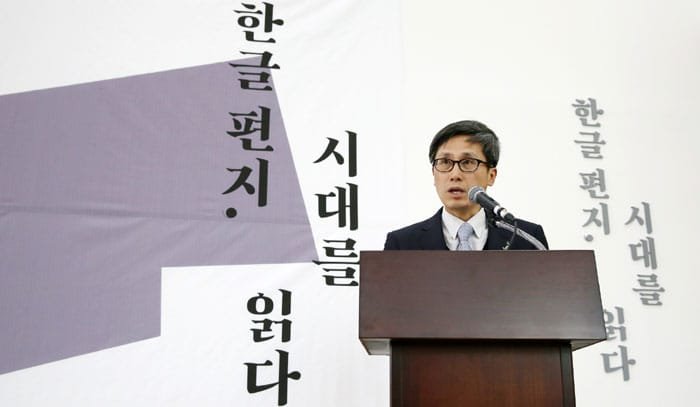 President Kim Dong-ho of the Presidential Committee for Cultural Enrichment (above) and the Director of the National Hangeul Museum Moon Young Ho (bottom) deliver congratulatory remarks during the opening ceremony of the special exhibition. 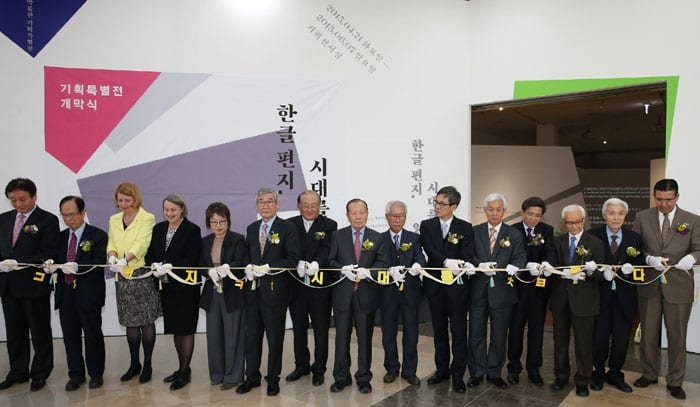 VIP guests and other attendees at the opening ceremony of the special exhibition prepare cut the honorary ribbon. 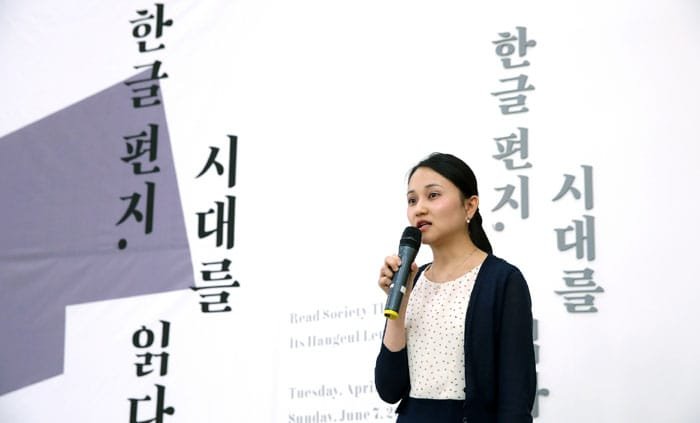 During the opening ceremony, Yulia Pak from Uzbekistan speaks about the Korean letter she wrote to her teacher at the King Sejong Institute. 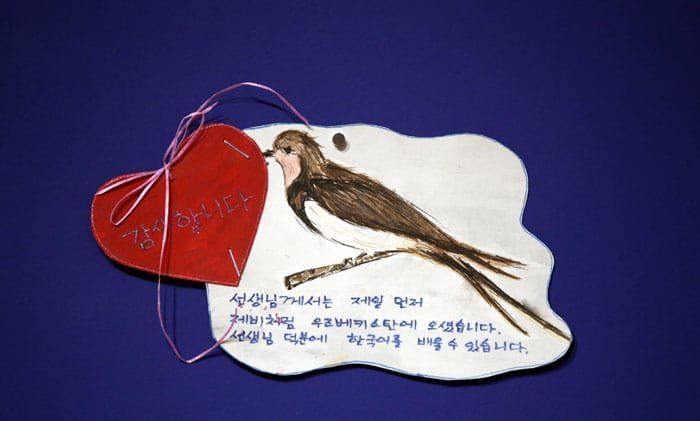 Khvan Angelika of Tashkent wrote a letter to her King Sejong Institute teacher in Korean.