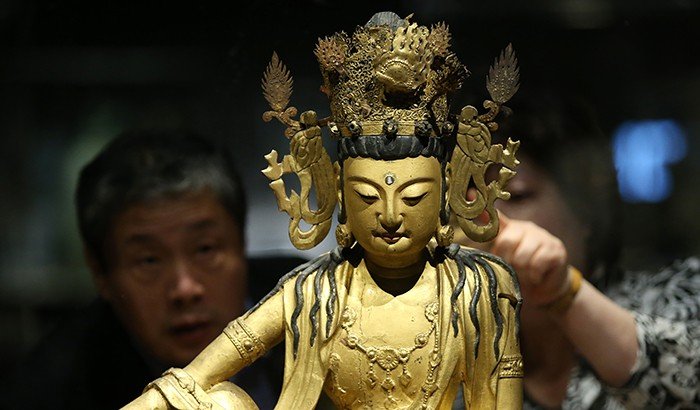 Visitors admire the ‘Avalokiteshvara Bodhisattva and Bokjangmul’ produced in the 13th century during Goryeo times, during a press opening for the ‘Devout Patrons of Buddhist Art’ exhibit, at the National Museum of Korea on May 22.

A special exhibition allowing a peek into the earnest hopes and minds of ancient people, as reflected in Buddhist art, has just opened.

The “Devout Patrons of Buddhist Art” exhibit being held at the National Museum of Korea from May 23 to August 2 not only demonstrates the essence of Korea’s ancient Buddhist art, but also explains the history of how these art works were produced, focusing on the human stories of the masterpieces.

The Korean title of the exhibit contains the word balwon, which means that people practice good deeds and pray to Buddha to make their wishes come true. Since Buddhism was transferred to the peninsula during Korea’s Three Kingdoms Period (57 B.C.-A.D. 668), kings, the royal family, aristocrats and commoners all presented their properties, such as paintings, sculptures, bells and sutras, to Buddha in religious rituals. Their hopes and religious devotion were reflected in temples and on Buddha statues and Buddhist paintings. Now, we can see the joy, anger, sorrow and pleasures of people from ancient times through these religious art works. 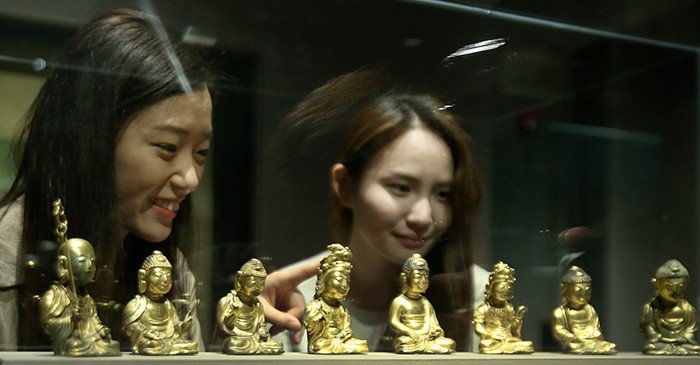 Visitors admire the miniature Buddha statues at the ‘Devout Patrons of Buddhist Art’ exhibit at the National Museum of Korea on May 22.

On display are 431 artifacts from Korea’s Three Kingdoms Period and from Goryeo (918-1392) and Joseon (1392-1910) times. Visitors will be able to see the, “Bokjangmul, Objects From the Amitabha Buddha of Heukseoksa Temple,” made of colorful textiles, as well as the, “Bhaishajyaguru Triad,” a painting presented by Queen Munjeong (1501-1565). The latter portrays the hopes of women in Joseon’s royal court. Visitors admire the ‘Saving Hungry Ghosts by Giving Nectar’ painting produced during Joseon times in 1764, part of the ‘Devout Patrons of Buddhist Art’ exhibit going on at the National Museum of Korea, on May 22. The painting on the right is the ‘Shakyamuni’s Preaching at Vulture Peak’ painting, made in 1777 during Joseon times.

“The Buddhist art on display at the exhibit includes state-funded-and-produced reliquaries and small Buddhist paintings that were made out of the humble hopes of commoners. They all reflect religious beliefs and wishes,” said the National Museum of Korea. “The wishes reflected in Buddhist art are not much different from the hopes held by people of modern times.”

Four gilt panels form a box that contained a reliquary. They are on display at the ‘Devout Patrons of Buddhist Art’ exhibit going on at the National Museum of Korea. The ‘Buddha With Inscription: Seventh Year of Yeonga’ statue is currently on display at the National Museum of Korea. This is Korea’s oldest Buddha sculpture and the inscription tells about people who took part in making the sculpture and the time and purpose of its production. The production of the sculpture was arranged by 40 monks at Dongsa Temple in Pyongyang, the capital of Goguryeo (37 B.C-668 A.D.), in 539 to show their religious devotion.