In 1985, the decision was made to build a dam on the Hwanggang River in Hapcheon-gun County, Gyeongsangnam-do (South Gyeongsang Province), in the southern part of the Korean Peninsula. They wanted to solve the chronic problems that result from seasonal floods. A study was conducted beforehand to examine the land that would be submerged if the dam were to be built.

It was then that the surveyors found ancient tombs on a hill in Ssangchaek-myeon, Hapcheon-gun County. For many years, the place was called Okjeon (옥전, 玉田), literally meaning, “bead fields,” because jade was often found in the area.

In one of the tombs was found a hwandudaedo, a type of golden sword decorated with a dragon pattern and with a phoenix inscribed inside a ring on the pommel. In those times, a dragon usually symbolized strong political power, and four of the swords were excavated in the one tomb. 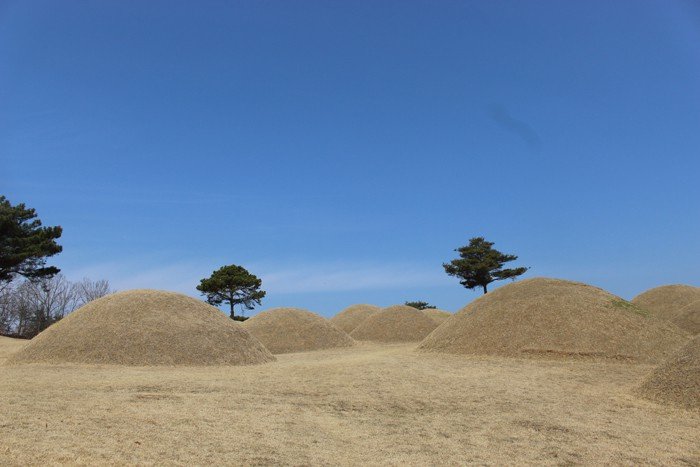 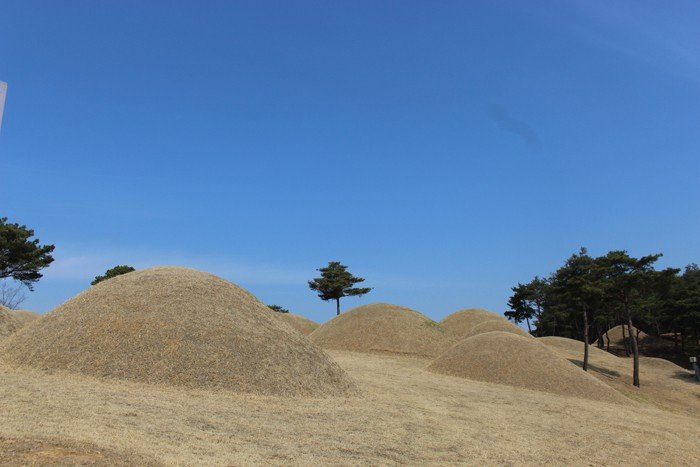 A collection of ancient tombs are from the Dara kingdom, which prospered in the 6th century. The tombs have many relics that reveal information about the detailed history of ancient Korea.

A total of seven swords were found in the tombs in the area. Considering that only a total of 40 hwandudaedohave been discovered across the entire Korean Peninsula, seven is quite a large number at one site.

In addition, archeologists found Roman glass at the site, showing that there existed some system of international trade along the Silk Road. A large number of masks and armor for horses were also found, indicating that there were fierce cavalry battles. 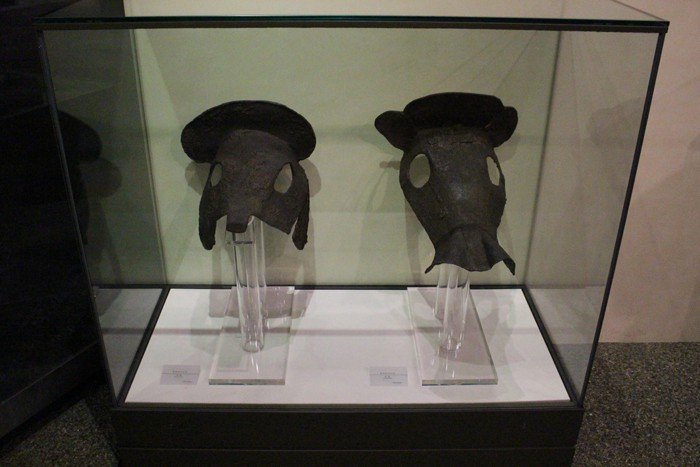 A hwandudaedo (top) is a golden sword decorated with a dragon pattern and with phoenixes on the pommel. They suggest the existence of a strong ruling class in Hapcheon-gun County in ancient times. Armor for horses (bottom) indicates that there were fierce cavalry battles. 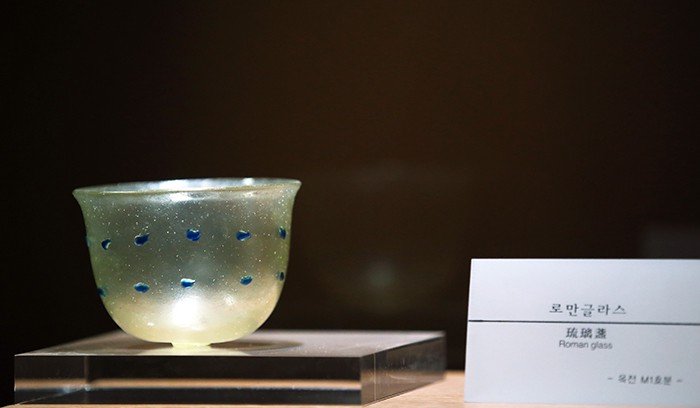 An artifact of Roman glass (top) shows that the ancient Hapcheon area had some international trade along the Silk Road. Sophisticated golden earrings (bottom) show how well-developed metalsmithing techniques were at that time.

The Okjeon area is believed to have been part of the Gaya Confederacy (가야, 伽倻, 加耶, 伽耶), a political grouping of territorial polities in the Nakdonggang River basin in the southern part of the Korean Peninsula. Gaya has been overshadowed by the peninsula’s three ancient kingdoms — Silla, Baekje and Goguryeo — and the true nature of Gaya is still largely unknown. Gaya is mentioned only in the “Nihon Shoki,” a Japanese historical text written in the 8th century, and in the “Samgukyusa,” a Korean history book written in the 13th century.

Excavations of the Okjeon tombs in the late 20th century led to the discovery of another ancient kingdom called Dara, which prospered some 1,500 years ago. Dara was an ancient nation that existed in what is now Hapcheon-gun County and is believed to have been part of the Gaya Confederacy.

During the five different digs that took place between 1985 and 1992, researchers came across 1,000 tombs in the area. Among them, 115 have been excavated. The Hapcheon Museum, opened in 2004, displays the relics discovered in the tombs. Now, the museum is surrounded by Okjeon tombs.

In Hapcheon-gun Country, the tombs are located in five areas, including Okjeon. This means that Hapcheon, part of the Gaya Confederacy, consisted of at least five polities. One of the important reasons that ancient kingdoms formed in this area was the existence of iron. The earth around Hapcheon is known to have been rich with iron ore in ancient times. According to the Geographic Records of the Sejong Annals from the 15th century, there was a smelting factory that processed iron ore, and a large amount of steel was produced there. In addition, the Hwanggang River flows into the Nakdonggang River, the longest river in the southern part of the Korean Peninsula, and flows into the South Sea. This would have made active trade with neighboring kingdoms in Japan and Silla quite possible. The Okjeon tombs, which were discovered after some 1,500 years, are expected to play the role of a time capsule, showing us every more clearly the history of the Gaya Confederacy, part of the ancient history of this peninsula. The Hapcheon Museum has a sculpture designed after the hwandudaedo, a golden sword decorated with a dragon pattern and phoenixes. The swords were a symbol of political power during ancient times. 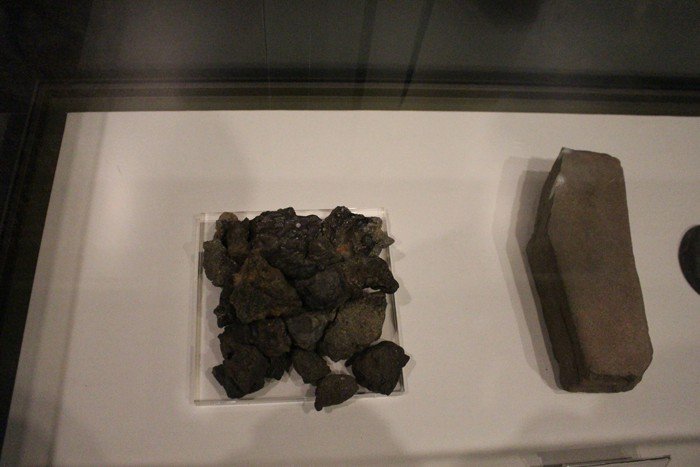 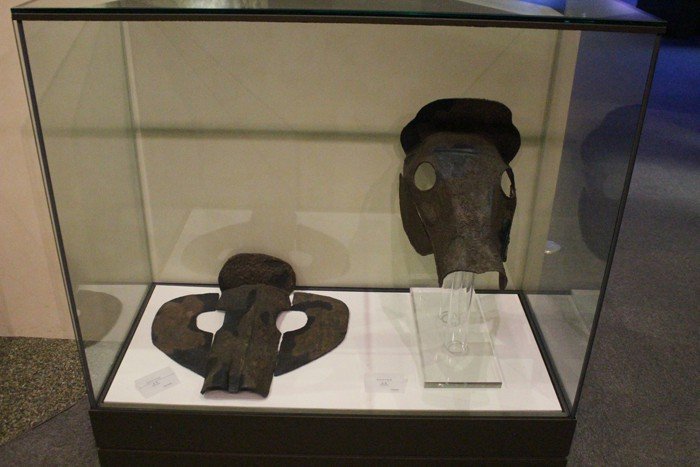 The lands around Hapcheon are known for having produced and processed iron ore over many years. The Hapcheon Museum has both steel remnants (top) and steel armor for horses (bottom) on display. 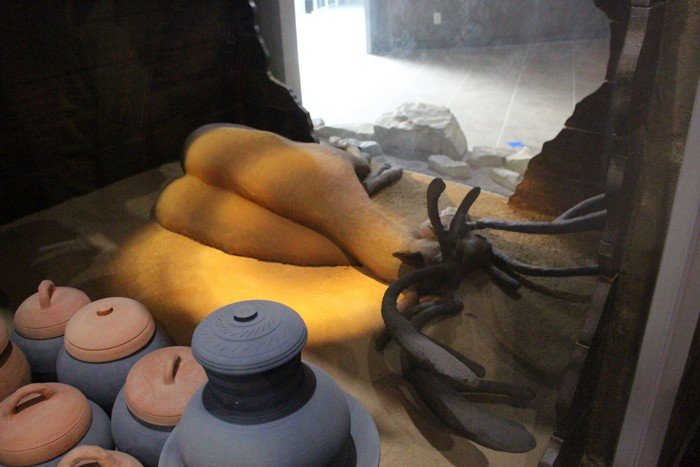 A replica of one of the Okjeon tombs shows many of the buried artifacts, including bows, ironware and jars. A deer (bottom) was also found buried in one of the tombs.