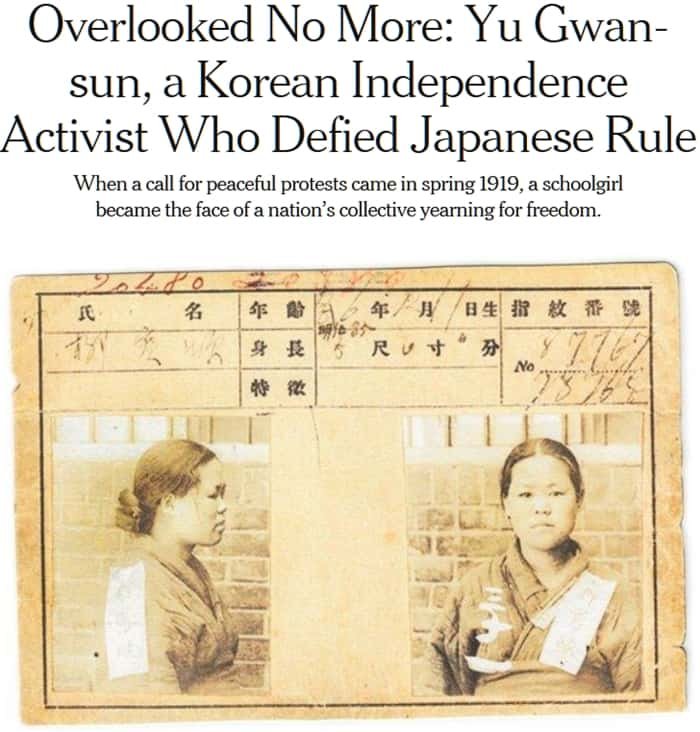 By Kang Gahui and Yoon Jihye

The article was part of the “Overlooked No More” series that sheds new light on famous or historic women in honor of the 110th International Women’s Day this year. In the article “Yu Gwan-sun, a Korean Independence Activist Who Defied Japanese Rule,” the paper carefully covers Yu’s life and achievements.

The newspaper introduced details about her birth, family background, the way in which she participated in the Ewha Haktang student demonstrations, and how she led the independence movement at the Aunae, a marketplace in Cheonan.

The NYT quoted Yu as saying that, “Even if my fingernails are torn out, my nose and ears are ripped apart, and my legs and arms are crushed, this physical pain does not compare to the pain of losing my nation,” highly appraising Yu for her grit and firmness in the face of torture at Seodaemun Prison.

The article said that, “When a call for peaceful protests in support of Korean independence came in spring 1919, a 16-year-old girl named Yu Gwan-sun became the face of a nation’s collective yearning for freedom. The March First Movement did not immediately result in Korea’s independence, but it crystallized a sense of national unity and was a catalyst for the resistance.”